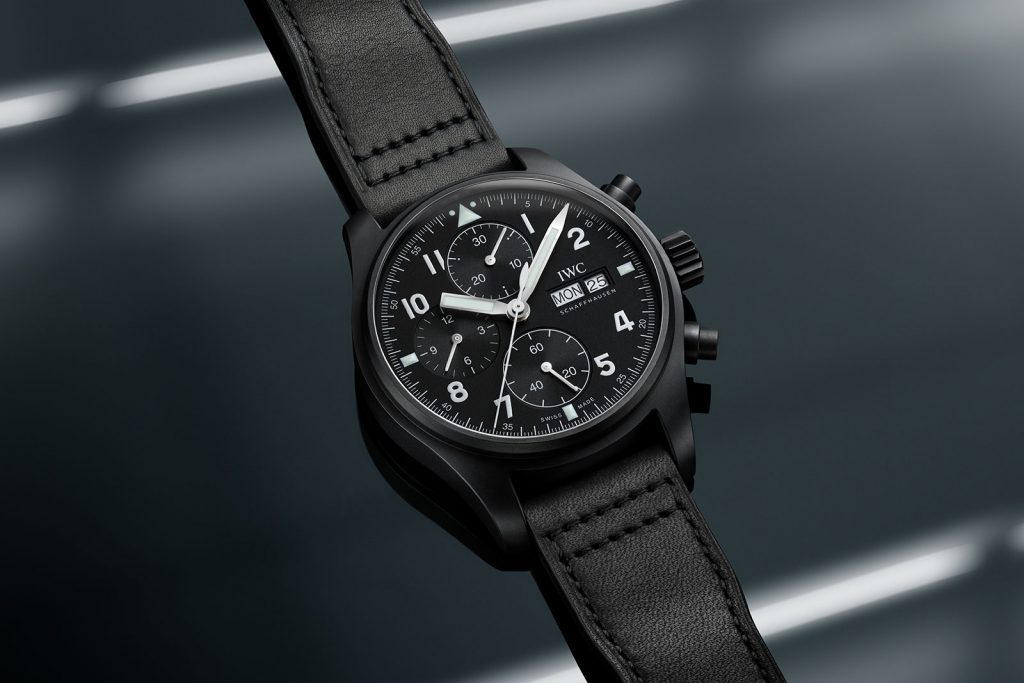 IWC has created modern icons such as the Big Pilot and the Portugieser Chronograph over its 152-year history. But there are also hidden gems in the archives, timepieces that go unnoticed before exploding into unexpected fame. The “IWC Fliegerchronograph Keramik” was IWC’s first Pilot’s Watch in 1994, featuring a case made of black zirconium oxide ceramic. Despite its use of cutting-edge material and its purist instrument design, the chronograph enjoyed little success. After only about a thousand pieces, production was discontinued a few years later However, after nearly a quarter-century of obscurity, the watch became a cult classic and is now considered one of the most sought-after models in IWC’s recent history.

The dial design on the new tribute edition is a faithful replica of the original. However instead of ceramic, it has a case made of Ceratanium®, a revolutionary new material developed by IWC. This special edition (Ref. IW387905), powered by the in-house 69380 calibre and fitted with a black calfskin strap, is limited to 1000 pieces and sold exclusively online.

How the legendary Ceramic Fliegerchronograph went from obscurity to cult classic

The ref. 3705 did not become well-known until nearly a quarter-century later. Following several articles on specialized blogs, the “Black Flieger” piqued the interest of an increasing number of watch enthusiasts. The once-forgotten chronograph, with luminous indices and hands that had aged to a warm orange over time, was winning collectors’ hearts with its distinct neovintage charm. One piece from former IWC director Günter Blümlein’s personal collection was auctioned off for a whopping 53,750 US dollars. However, the ref. 3705 embodies more than just IWC’s heritage as a manufacturer of professional instrument watches for aviators. The model’s black ceramic case is also an early testament to IWC’s extensive materials expertise since the 1980s, a quality that still distinguishes the company as a modern watchmaker today. 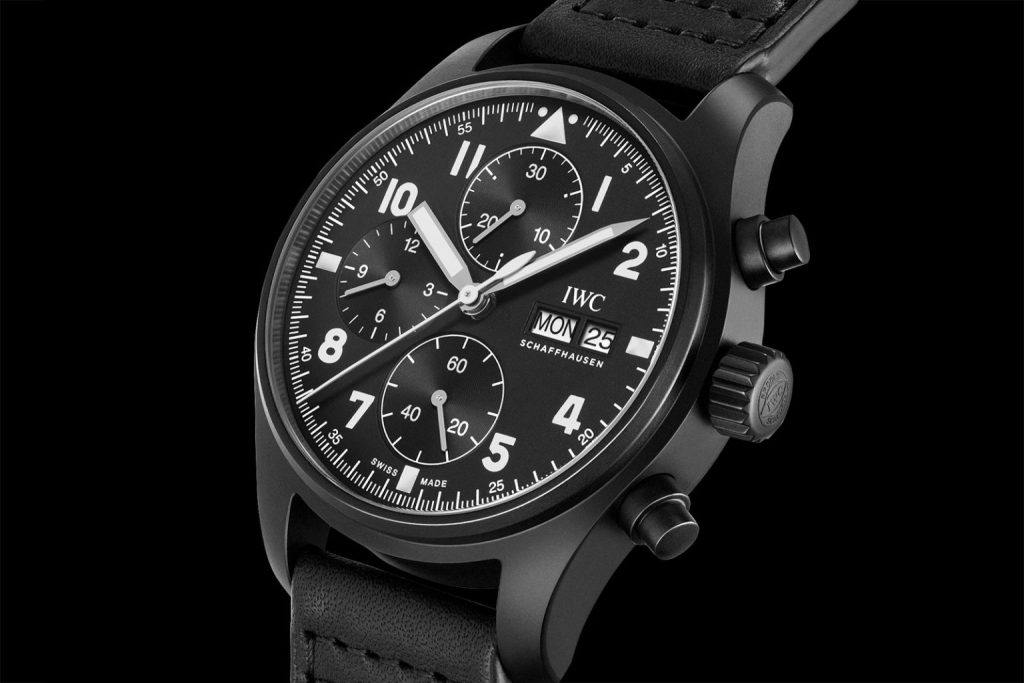 About the Pilot’s Watch Chronograph Edition “Tribute to 3705”

The limited-edition Pilot’s Watch Chronograph Edition “Tribute to 3705” (Ref. 387905) pays homage to this exceptional timepiece. The dial is a replica of the original from the 1990s. Two totalizers at 9 and 12 o’clock show stop times of up to 12 hours, with a small second at 6 o’clock. Another feature is the day and date display at 3 o’clock.

The ref. 3705 was a pioneer in the use of black ceramic, and the tribute edition incorporates a recent innovation from IWC’s material scientists: the case, chronograph pushers, and pin buckle are made of Ceratanium®, an IWC-developed material that is light and robust like titanium, but also hard and scratch-resistant like ceramic. The case components are machined from a special titanium alloy in the first step. Following that, the parts are subjected to a furnace firing process, during which a phase transformation occurs and the material’s surface takes on ceramic-like properties.

Powered by the in-house 69 calibre

While the original ref. 3705 was powered by the Valjoux calibre 7750, the new Pilot’s Watch Chronograph Edition “Tribute to 3705” features sophisticated movement technology from Schaffhausen. The in-house 69380 calibre is at work inside the 41-millimetre case. This robust and precise chronograph movement in classic column wheel design is one of the latest developments from IWC’s engineers. A bi-directional pawl winding system reliably builds up a power reserve of 46 hours. The Pilot’s Watch Chronograph Edition “Tribute to 3705” (Ref. IW387905) is available exclusively online as a limited edition of 1000 pieces, shop it here now.

Over its 150 year history, IWC Schaffhausen has developed a reputation for creating functional complications, especially chronographs and calendars, which are ingenious, robust, and easy for customers to use. A pioneer in the use of titanium and ceramics, IWC today specialises in highly engineered technical watch cases manufactured from advanced materials, such as titaniumaluminide and Ceratanium®. Preferring the principle of “form follows function” over decoration, the Swiss watch manufacturer’s timeless creations embody their owners’ dreams and ambitions as they journey through life. Shop all IWC Schaffhausen watches here.

Post Views: 564
Enquire now We will inform you when this item is available for purchase. Please provide your contact details below.